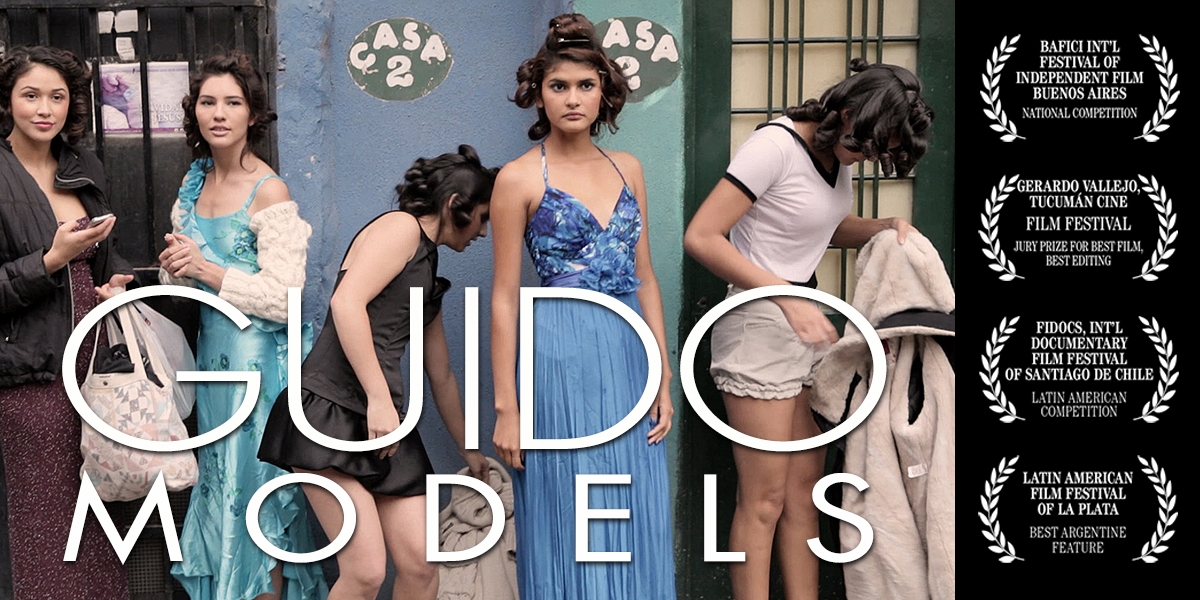 Guido Fuentes is a Bolivian immigrant who lives in Villa 31, the biggest slum in Buenos Aires, where he runs a modeling agency and academy for local girls. His dream is to achieve social integration in the world of fashion. With Sonia and Delia, his two more promising models, he embarks on a journey to realize his dream and change society’s perception.

“Resolutely empathic, debutant Julieta Sans films Guido and the girls in their environment and the catwalk, integrating both spaces, just like they aspire to do it.” – Horacio Bernades, Pagina 12

“This is probably the biggest achievement of the film: the observation of a rare occurrence from a point of view that humanizes both the subjects and the viewers.” – Horacio Tejera, Diario Republica, Uruguay

“Photographer and director Julieta Sans accompanies Guido in his everyday work in a film that captures in subtle strokes the story of a search and dreams that are possible to conquer, even in difficult circumstances.” – La Nacion, Argentina

“The film goes beyond and becomes a noble portrait of a man who tries to find his place in the world by doing what he loves.” – Micropsia, Otros Cines

“Shot with the sensitive eye of a photographer, Sans’ camera captures the colors and textures of of Guido’s beloved villa, finding beauty amongst the squat, haphazardly constructed brick buildings much like Guido finds grace and beauty in the otherwise street-tough, tomboyish young woman who call its streets home.” – Andrew S. Vargas, Remezcla

“Guido Models is a tribute to a man with a singular vision while highlighting the economic and social barriers he continues to face as he fights to make his vision a reality.” – Andrew S. Vargas, Remezcla

“I am surprised by the rooted racism found in this country, which was built almost entirely by immigrants, and also the homogeneity of beauty standards...In Europe and the United States there is a lot more diversity.” – Julieta Sans, Interviewed by Harpers Bazaar Argentina

In 2011 she relocated to Argentina specifically to work with Guido. She has been documenting his work with the girls since then, both in still and moving image.

In 2012 she was selected to participate in UTDT’s experimental film program, run by directors Martin Rejtman and Andres Di Tella, where she directed a medium length documentary, a short documentary, and a short fiction film. In 2013 Guido Models, the film project, is awarded the digital documentary fund from INCAA (Argentina’s national film institute).

After ten years living in Europe and a career as a documentary photographer, I had no intention of returning to Argentina to live. But in 2011, while reading the paper during a visit, I saw a short interview with Guido where he complained about how the local council refused to support a fashion and music show he wanted to organize in Villa 31. I was immediately drawn by the strength and conviction in his words. I emailed Guido, we met and started working together immediately. The film was shot over 3 years (the first two by myself and the last one with SM Cine, a production company that joined the project and secured the funding from the Argentine Film Institute.)

The film is shot in an observational style, focusing on Guido and the world he created. The background of Villa 31 is present, but the camera is careful not to wallow in the hostility of the environment.

Guido embodies a burning vitality and desire for growth (with a slightly chaotic edge) that is such a big part of the identity of Latin America, and particularly of Argentina. Resilience and a strong willpower propel people forward, no matter what the challenges are. I think Guido epitomizes this spirit perfectly.

Villa 31 has been shown in countless reportages, photographs and films, and the people who live there are always portrayed as either victims or criminals. I felt it was very important to make this film to tell the story of just one person among many, who takes ownership of his life and destiny, going after his goals.

Personally, I am not fond of seeing how people from disadvantaged backgrounds are shown in documentary films: they always seem to have to suffer, or to strive for a higher, noble purpose. But I think that there is no higher purpose than following one’s goals. And if Guido, Delia, and Sonia’s desire is to work in fashion, why shouldn’t they?