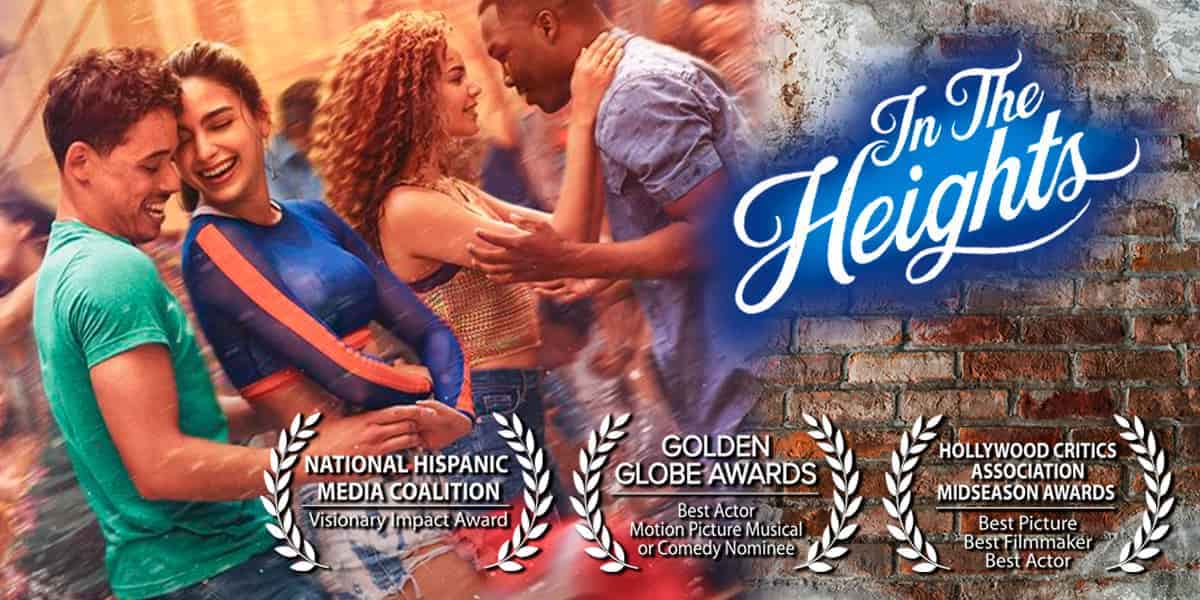 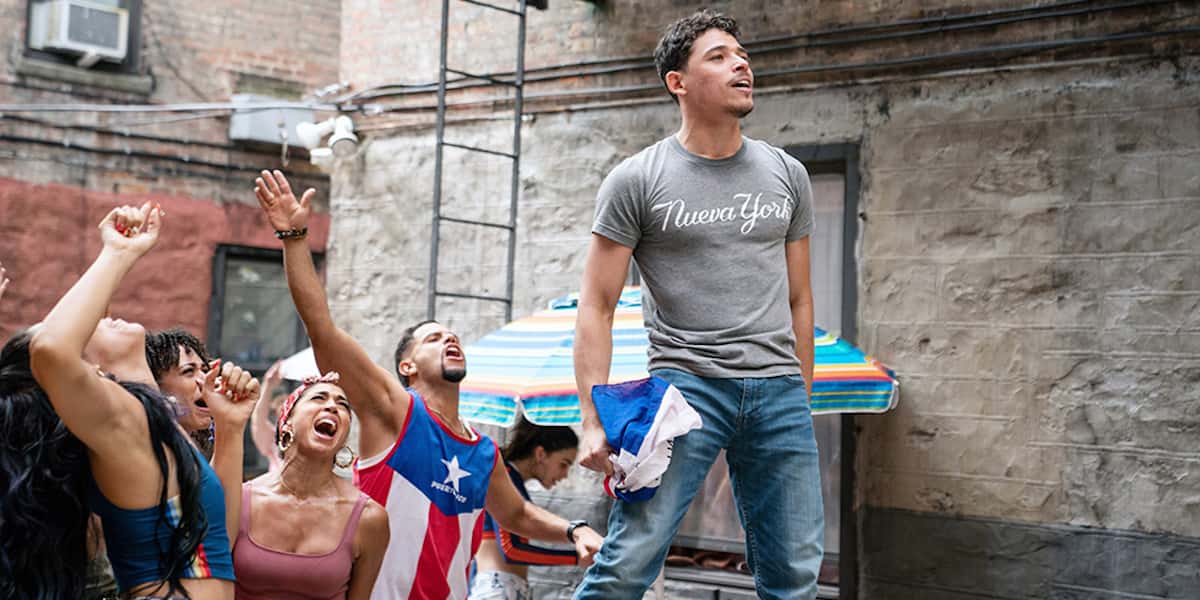 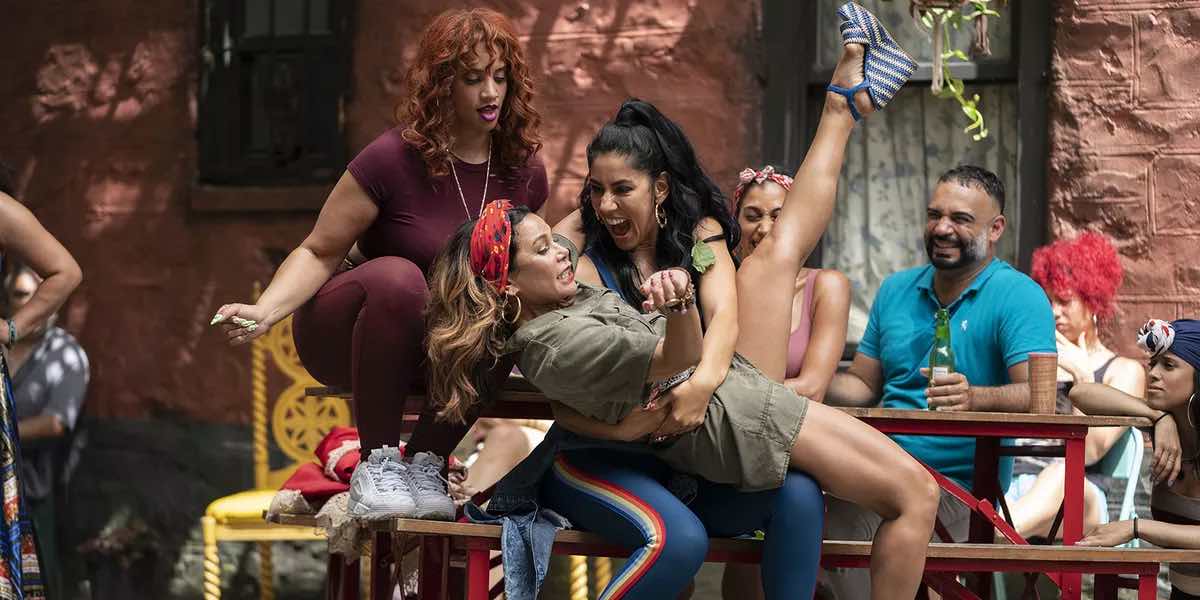 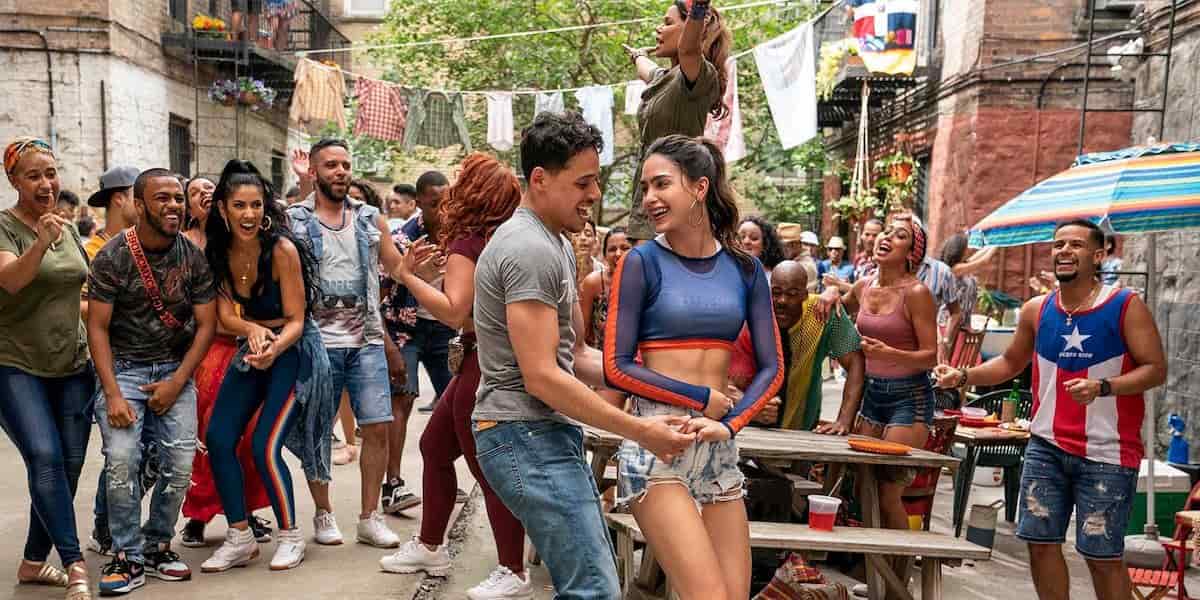 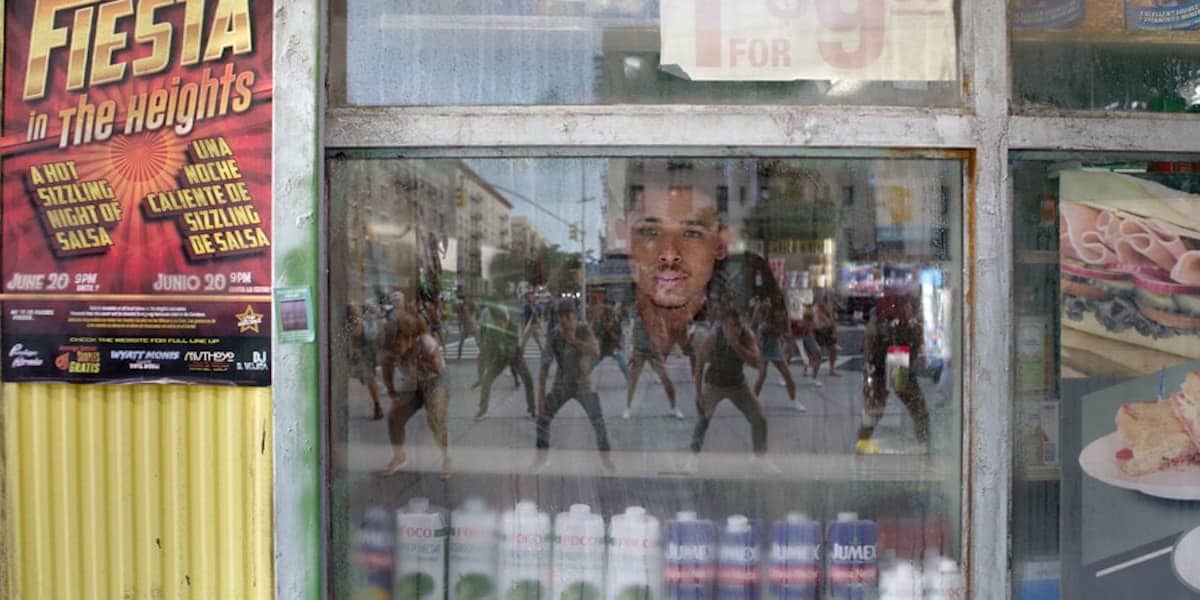 An exuberant musical and visual feast created by Lin-Manuel Miranda, In the Heights is a love letter to the Washington Heights neighborhood and an homage to the diverse Latinx communities of Upper Manhattan.

The scent of warm coffee hangs in the air just outside of the 181st St. subway stop, where a kaleidoscope of dreams rallies a vibrant and tight-knit community.

At the intersection of it all is a likable and magnetic bodega owner Usnavi, who hopes, imagines, and sings about a better life. For him, the dream is not only to return to the happy Dominican Republic of his childhood but also, to finally ask the intimidating Vanessa out on a date. An aspiring fashion designer, Vanessa dreams of leaving her dead-end beauty salon job and moving downtown to pursue her passion career. Smart college student Nina yearns to reinstate her identity as a Latina on the heels of her dispiriting year at the white-dominant Stanford. Ultimately, Usnavi and the residents of the close-knit neighborhood get a dose of what it means to be home.

“It’s a piece of mainstream American entertainment in the best sense — an assertion of impatience and faith, a celebration of communal ties and individual gumption, a testimony to the power of art to turn struggles into the stuff of dreams.” – A.O. Scott, The New York Times

“In The Heights works, both as an intimate ode to a tight-knit community made up of individuals stuck in an in-between (a visceral state of being that will be deeply familiar to fellow immigrants), and a hard-hitting political statement that has something to say about all the rampant systemic injustices ingrained in a maddeningly white-normative society, from gentrification to casual racism.” – Tomris Laffly, RgertEbert.com

“This is a stirring valentine to a neighborhood and its people that, as the film tells it, stared gentrification in the eye and stood their ground, staying true to their cultural identity.” – David Rooney, Hollywood Reporter

“In the Heights can represent many things for many different viewers. It can be a story about ambitious, hard-working people chasing their dreams. It can be a reflection on the immigrant experience and the struggle to find where you belong. It can also be a tribute to our parents’ sacrifices.” – Monica Castillo, The Wrap

“Like a cool lemon ice on a blistering summer day, In the Heights feels like a reward.” – Ty Burr, The Boston Globe

“The energy feels authentic, and endlessly renewable. The cultural matrix is specific, yet the passions are universal. This grand and welcoming entertainment is exactly what’s needed to bring movie audiences back into the fold.” – Joe Morgenstern, The Wall Street Journal

Jonathan Murray Chu is an American film director, producer, and screenwriter. He is best known as the director of 2018’s Crazy Rich Asians, the first film by a major Hollywood studio to feature a majority cast of Asian descent in a modern setting since The Joy Luck Club in 1993.

The films that he has directed often include musical elements, including the dance films Step Up 2: The Streets (2008) and Step Up 3D (2010), musicals Jem and the Holograms (2015) and In the Heights (2021), and the live concert films Justin Bieber: Never Say Never (2011) and Justin Bieber’s Believe (2013). Chu is an alumnus of the University of Southern California School of Cinema-Television. There, he won the Princess Grace Award, the Dore Schary Award presented by the Anti-Defamation League, the Jack Nicholson directing award, and was recognized as an honoree for the IFP/West program Project: Involve.

“I wrote [the first draft of In the Heights] on a winter break [from college]. I didn’t sleep. My long-term girlfriend went abroad. So suddenly, I had all this time, and all this angst, which are two of the ingredients you need the most when you’re 19 years old.

At that time, I was living in the Latino program house [at Wesleyan University]. It was called La Casa de Albizu Campos, and it was on-campus housing. At Wesleyan, there’s a program house for every kind of cultural affinity. To get into La Casa, you needed to write an essay about how you plan to serve the Latino community at Wesleyan. My entrance was the arts. I was, I think, the only art major in my house. I was there with engineering majors and math majors. But we were all first-generation or second-generation Latino kids. I didn’t have that experience in high school. And suddenly I had friends who were really just like me in that we were as fluent in some things — Marc Anthony, the TV we grew up with, Walter Mercado — as we were with mainstream American culture.

I think that was a big part of me being able to access more of myself in my writing. Everything I’d written prior to then kind of sounded like [Rent composer] Jonathan Larson, kind of musical theater-ish, rock-ish stuff. But I didn’t bring my culture to it or any of my heritage to it.

Living in that house, I realized, “Oh, there’s more out there like me. I just needed to write the truest version of what I know.” This was in 1999 or 2000, at the time of the first Latin pop boom. Ricky Martin, “Cup of Life.” Marc Anthony singing in English for the first time. Enrique Iglesias, “Bailamos.” I’m watching all these incredibly talented Latin guys. But they’re all incredibly hot Latin guys, and I was like, “That’s not me.”

I had directed West Side Story at my high school years before and realized that there was nothing in the musical theater canon that played to any of my strengths. So it was like, “Let me write what is missing.” Then I had all of these other forces pushing on me that led to In the Heights. Can we talk about ourselves with love? Can we talk about our neighborhoods? And have a fully Latino cast?”