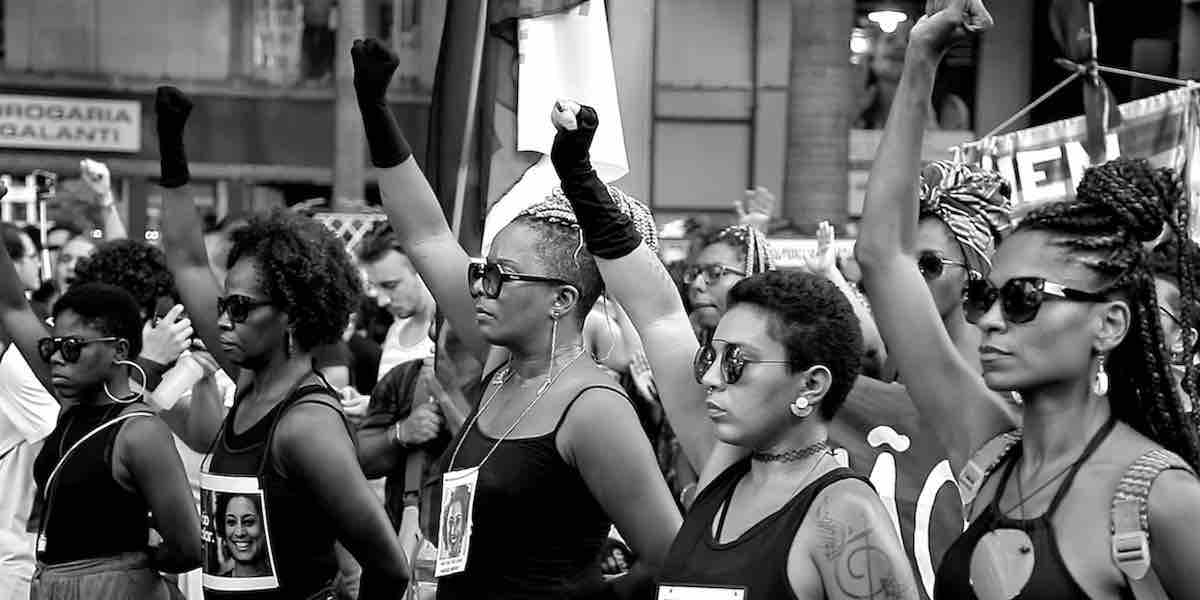 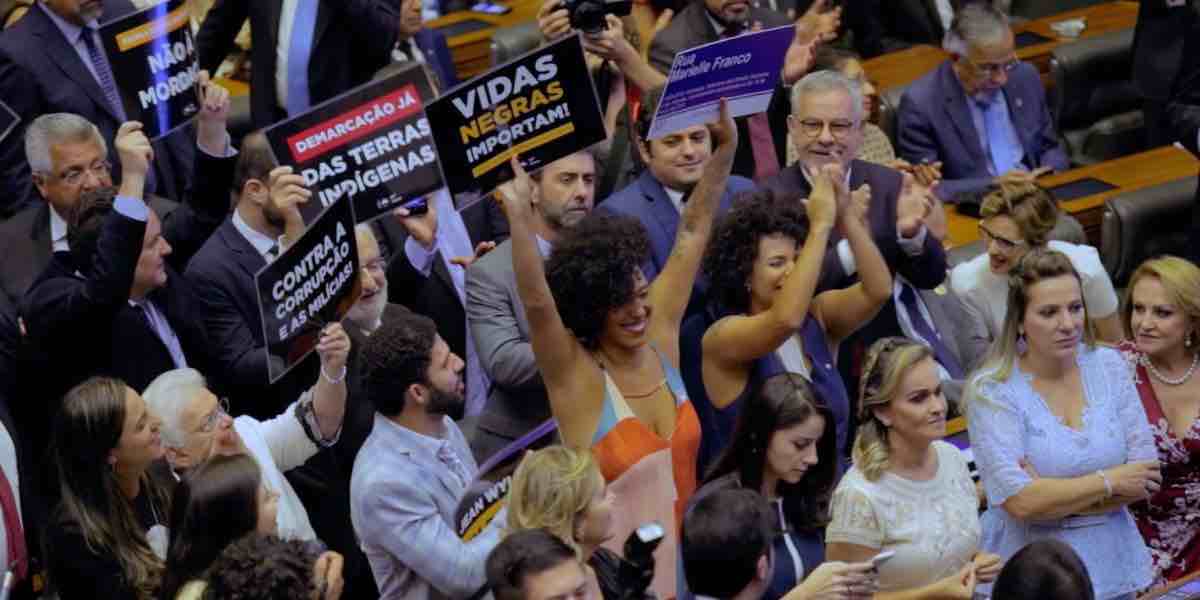 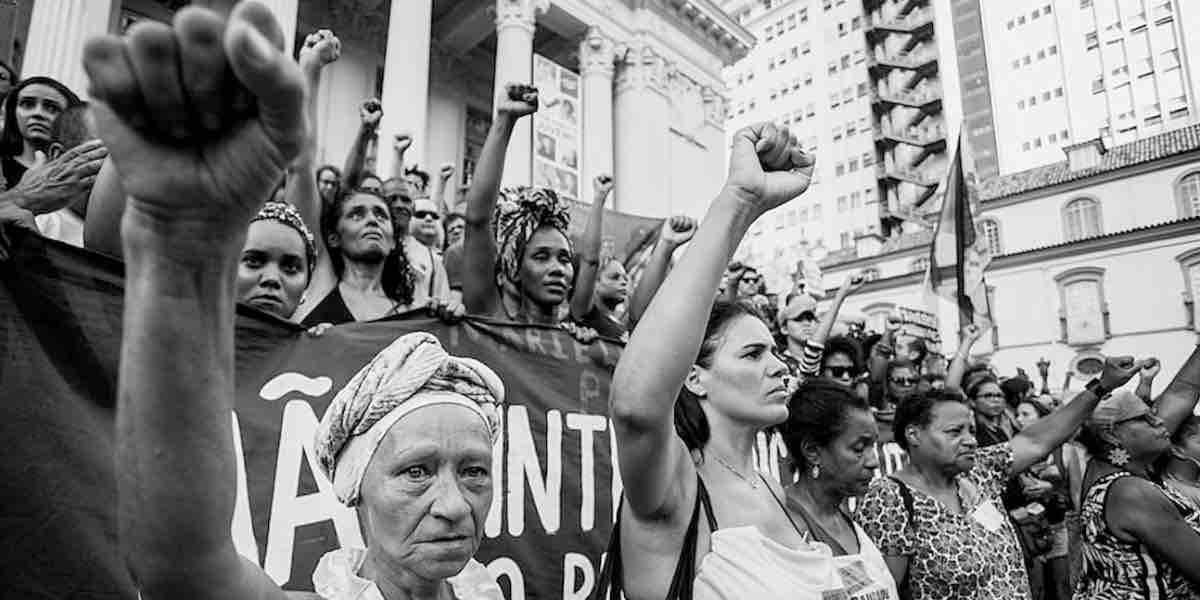 The 2018 elections turned into the biggest political upheaval led by Black women that Brazil has ever seen, in response to the brutal execution of Rio de Janeiro city councilor and activist Marielle Franco. In all states, Black female politicians rose up against the growth of fascism in the country.

In Rio de Janeiro, Mônica Francisco, Rose Cipriano, Renata Souza, Jaqueline de Jesus, Tainá de Paula, and Talíria Petrone joined these unprecedented ranks by running for state and federal deputy. Seeds: Black Women in Power follows these women in various stages throughout their campaigns, transforming mourning into persistence and tenacity and demonstrating the potential of a new politics that centers all marginalized peoples.

“Throughout the documentary, the audience truly gets a sense of how close-knit this community is. These women are putting their lives at risk to fight for what they know will provide a better future for those who have been shut out of power. But to honor Franco and all they stand for, they must take that risk in order to push forward. Though they may seem smaller than the most powerful political party, their strength comes from their community, the roots they have grown from.” – Chanel Cain, Kweli News

“Come[s] to show and reflect on a crucial issue of our time. In this case, structural racism, responsible for almost four centuries, for the marginalization of the majority of the Afro-Brazilian population.” – Camila Marins and Maria do Rosário Caetano, Black Brazil Today

Éthel Oliveira is a documentary filmmaker and editor and the co-producer of Seeds: Black Women in Power. She studied social sciences at Fluminense Federal University, researching the Guaraní indigenous people in Rio and Mato Grosso do Sul through the Ethnographic Film Laboratory and spent ten years producing human rights media projects in Pernambuco. Her previous films are Third Diaspora (2011), November 20, 2011 (2011), and The End (2017).

Júlia Mariano is a director, screenwriter, producer, and graduate from Cuba’s School of Cinema and Television (EICTV). In 2014, she directed The Threatened People, which won awards at Rio de Janeiro’s Short Film Festival, São Paulo’s Kinoforum Festival, and Maranhão’s Guarnicê Film Festival. Produced in partnership with the Movimento dos Sem Terra (Landless Movement), she also directed From the Body of the Land (2015). In 2017, she founded NOIX CULTURA and directed the documentary series Since June.

Co-producer Helena Dias captures the potential of Seeds: Black Women in Power when she points out that “throughout Brazil we actually don’t see a lot of Black women being the lead of pretty much anything.” The six Black women in the film’s spotlight prove that the seeds of change have been planted.

Dias felt the reverberations of Marielle Franco’s death. Her colleague Júlia Mariano had worked closely with Franco during her campaign, and both had admired the work she’d done to be a voice for change in an increasingly oppressive political sphere. Dias started attending events hosted by Franco political parties, where she saw faces and heard discussions that rang true for so many underrepresented people.

While her party started planning its campaign, Dias and Mariano began planning how to document it. As women, they wanted to be sure these stories were told and told properly.

“But there’s an issue here,” Dias said. “We are both white women. Makes no sense for us to do this movie if we’re not doing this with Black women.”

The two brought on director Éthel Oliveira, an Afro-Brazilian filmmaker and activist who is dedicated to sharing and uplifting the stories and resilience of Black people in Brazil, for the project. They also hired many other women and Black people for the production.

For the production side, funding was tight. Dias cites “living in a cruel government right now which hates arts and culture,” as to why it was hard to receive the funds they needed.