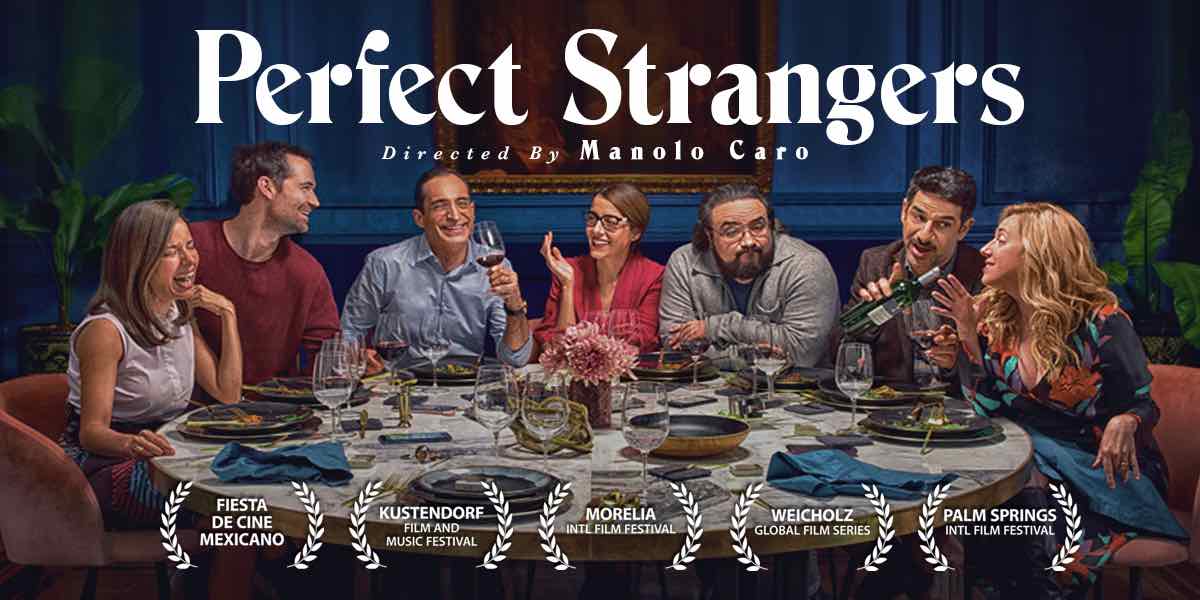 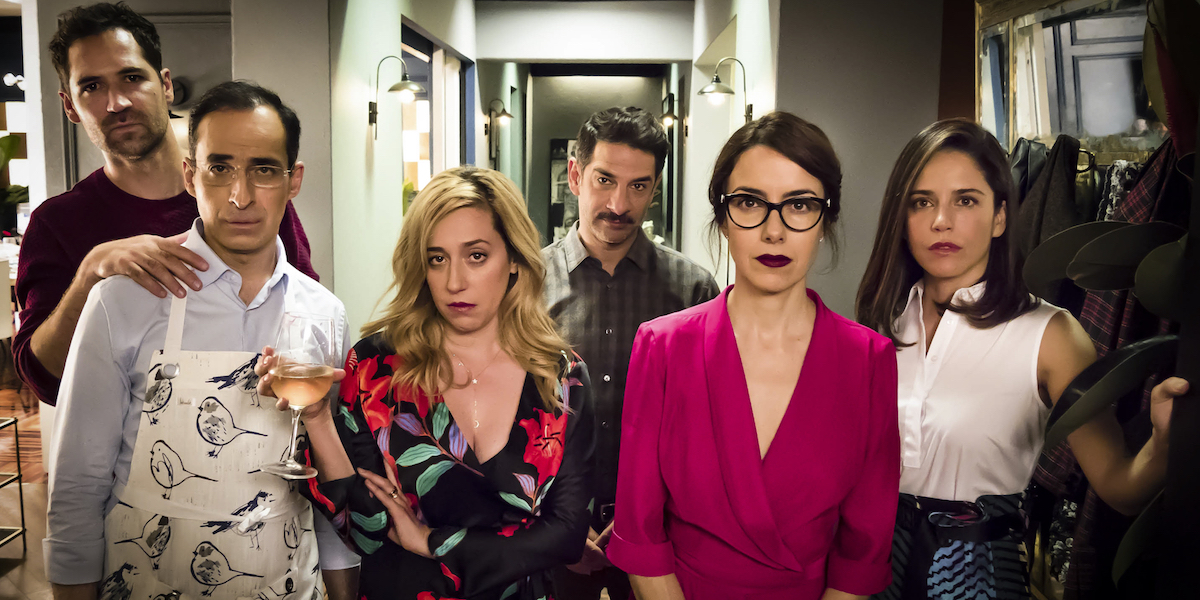 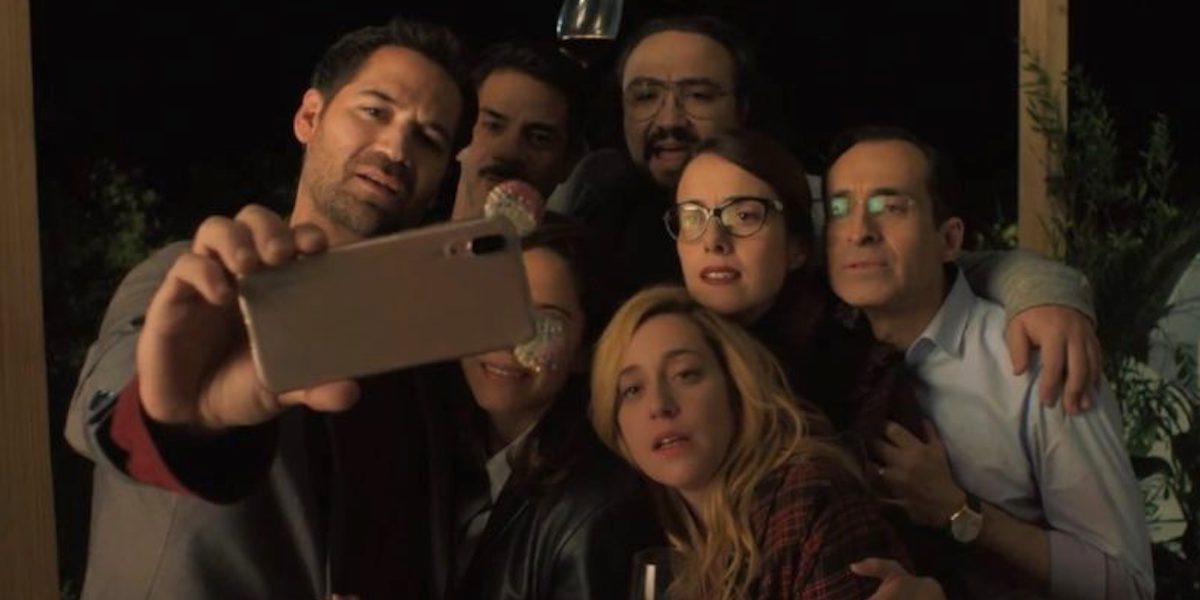 From Mexican director Manolo Caro (Netflix’s The House of Flowers) comes the electrifying comedy about a seemingly simple dinner party. When a group of best friends gets together during a lunar eclipse to share an intimate meal in the tasteful house of Eva and Antonio, they suspect it’s just another typical night, until the hostess proposes a game. All guests must lay their cell phones on the table and read aloud all incoming messages and answer all incoming phone calls in front of the entire group. What begins as a provocative party game quickly becomes a wild ride full of twists and “textual tension” in this over the top comedy about the secrets we all carry in our pockets.

Cecilia Suárez and Bruno Bichir lead a stellar ensemble of some of Mexico’s most respected actors in this adaptation of Perfetti Sconosciuti by Paolo Genovese, the Italian film that has become a global sensation inspiring remakes in countries like Greece, Spain, China, and France among others.

“Snappy, witty, and fast-paced... A modern comedy of manners that may hinge on the influence of cell phones and the internet, but chronicles emotions and twists that don’t need technological fluffing.” – Kate Erbland, IndieWire

“Perfect Strangers speaks to our compartmentalized lives, one eye on our shared world and the other on our private, digital screens.” – Elena Nicolaou, REFINERY29

“A wild and entertaining ride into the darker side of technology and the ominous ways in which we are letting our cell phones not only control us, but to also define us.” – Frank Wilkins, Reel Reviews

“Perfect Strangers is a deliciously dark comedy from Mexico...Caro approaches the material almost like a thriller...The camera seems to be in constant motion; a smart move that prevents the action from feeling stage-bound. The Rodrigo Dávila score pulsates, adding tension and a mysterious sense of urgency to the proceedings.” – USA Today

“The actors are uniformly superb, with Suárez and Bichir standing out. The sophistication of the characters, the mania for keeping secrets that maybe aren’t worth the effort and the sharp and sharply funny words (and sharp elbows) explain why these Perfectos Desconocidos stay connected and stay friends through all the loss of privacy and exposure that letting others study their “black boxes” allows.” – Movie Nation

Manolo Caro is a Mexican director best known as the creator, executive producer, and director of Netflix’s The House of Flowers. Other credits include The Immoral Life of the Perfect Couple, Perfect Strangers, and the upcoming show Someone Has To Die. All of these star Caro’s frequent collaborator and muse, Cecilia Suárez.

“When I saw the Spanish version in the cinema in Mexico, the first thing I thought is that I really wanted to do something like that. The movie is very contemporary and the script is very smart. It’s a little bit like a play, and I started in the theater. I wanted to put my soul and my heart into this version of an amazing idea by Paolo Genovese…I never saw it as a remake, I saw it as a celebration of a worldwide phenomenon and I wanted to be part of it. I can’t think of another movie that has been remade in 15 countries around the world. I wish I would have thought of it first.

The Mexican version ends up being more hilarious, more chaotic and more passionate like we Latinos are. We take the film to a place where we feel identified with our follies and our secrets. I believe that the Latinx public will identify with how these characters react to their secrets being revealed. Each version has its magic and relates to its own country. That’s what makes this one unique. The script for the Latin American version is well-rounded. It’s an incredible script, it’s intelligent.

It’s also a movie about how great technology can be, but also how destructive it is. It shows how harmful it is to live a double life via our phones and what happens when the truth comes out.”